This is a series of paintings done on 8 foot panels, displayed leaning up against the wall throughout the entirety of Gallery #4 in the Hyde Park Art Center in Chicago. One side of these panels shows devastation, the other side shows a utopia. The devastation is unrelenting ? it shows a world where every resource has been mined, from the trees in the forests, to the ocean and the human spirit ? there is nothing left but the reminisce of the culture that we opted for. The dried ocean floor with its oil tankers and the desolate neighborhood with the tire swing remain, but the corporate promises and support have completely faded. 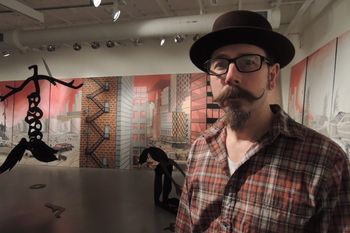 Tom Torluemke, although born and raised in Chicago, moved to Hammond, IN where he lived for over a decade. While there, he worked with the city and tried to build something sustainable. Based within the arts he and his partner Linda Dorman organized events and community betterment programs with the Northern Indiana Arts Association. The fact that Tom was not politically motivated ultimately made him a thorn in the side of those that were, and he had to watch as his vision was not appreciated and led to the building of another mall with more promises made but never kept.

This piece is a complete experience, it is not smart, it is not hip, it is not coming from the overly self-satisfied world of the intellectual and educated arts. This is one man?s fear ? a fear that is in all of us, the one fear we all too often decide to ignore 99% of the time. When we do think of it, when we make a choice because of the fear or because we want to be better, or even just be seen as being better, we are taking an action for the betterment of the whole. That is what Tom is asking of us, take a little action, it doesn't have to be much, maybe just start by turning around one panel to turn a dilapidated city-scape into a redwood forest, but for christs sake do something. 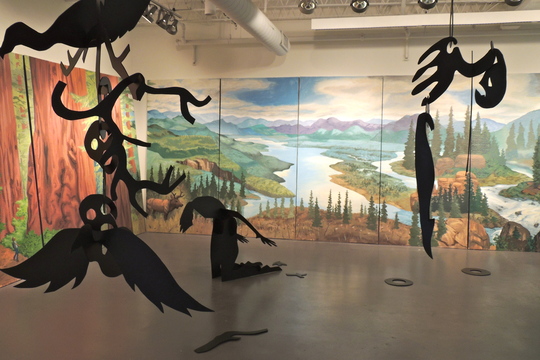