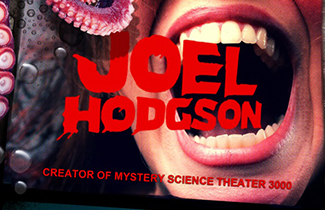 When I heard Joel Hodgson was going to be performing his one man show "Riffing Myself" in Chicago I jumped at the opportunity to interview the man. For those of you that are not either old enough to know Joel or just missed out on all fun because you were doing something else, he is the man behind MST3K. What, you may ask, is MST3K? Well, it is a cult comic series that begin in 1988 and featured Mad Scientists who shot Joel, and later, Mike into space forcing them to watch the worst movies ever made. The reason for this was so that the scientists could unleash the movie onto unwitting audiences and ultimately rule the world. Joel was accompanied by 2 robots which, as the shows intro explains, he made and together they make comedic comments about and during the movies, otherwise known as riffing. Oh yeah MST3K stands for Mystery Science Theater 3000 and fans of the show are called Mysties.

The big win here, and where a lot of my excitement stems from, is that Joel is a real Midwestern talent. If you are from the area you would see this right away, if you are not you would notice that there is something different about him, and it may seem a bit unpolished. I associate this to the fact that Joel is down to earth in his work and it shows, an honest and matter of fact demeanor are always on display with everything I have ever seen him do. In talking with Joel I asked him about this, he spoke of growing up in the Midwest and have aspirations of being in showbiz "You can only be a performer" he stated, and I see this as a very Midwestern approach. What I mean by that is he picked one path that made logical sense and did all the hard work of staying on that path and made it work for him. With a great work ethic, creativity and common sense he found no envelopes to push because everything he did he created himself. Repurposing, appropriating and recycling old ideas, taking other people paths or cow towing to the man has not been seen as a respectable creative practice in the vast Midwest, and might I add that Joel grew up in Stevens Point WI, not Chicago like I had the pleasure of, so his experiences regarding this are probably more extreme than I could imagine. 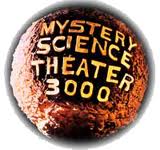 Joel has seen and experienced a wide array of successes in his career but the approach to his work is always the same, a lot of hard work and preparation as well as being able to do it. When talking about performing, as he is about to do twice at The Mayne Stage here in Chicago, he said "It's a big responsibility (to entertain an audience) so I only do it when I am able to" he went on to say "the commercial world of show business is kind of an awful thing and I like art much better", I hear that and tip my hat to the man. it doesn't seem to be that easy to be in the business Joel finds himself and survive doing what you love, and that has very much always seemed to me to be an art form for him.

Joel will be presenting 'Riffing Myself' which is the story of how Mystery Science Theater 3000 came to be. Joel tells the story of his lifelong passion for entertaining and performing and how this plucky Midwestern kid created one of the most niche cult classic series that has ever hit television. I am a fan of his so forgive me if I seem like I am exaggerating. The presentation features photos, videos, documents and notebook pages from Joel's personal collection, illustrating some rarely seen projects and the creative process that helps brings them to fruition. This is an all ages event and I should mention that for those who found their Midwestern creative voice watching things like MST3K there is a VIP package that includes a 4pm screening of Mystery Science Theater 3000, meet and greet with Joel, signed poster, light appetizers and reserved seats to the 8 PM show.

Posted by MartinJon at 9:37 AM