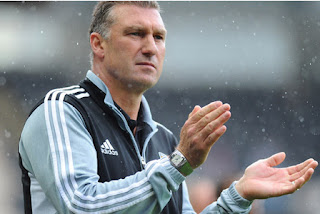 In Chicago, far away from the height of this issue I look to the stalemate reached between Leicester City and Hull City for Nigel Pearson. As A hull Fan I have to say I am sorry to see him leaving, he has accomplished a lot here and done his job quietly and purposefully. I commend Hull City in allowing Nigel to speak with Leicester only after being approached by Nigel himself, something The Foxes didn’t wait for when Hull came-a-knockin’ 18 months ago. I recall the exit interviews that Nigel gave upon leaving Leicester, they were all of him saying ‘Well, I am moving; I was surprised Leicester allowed it’.

Leicester lets him go less than 2 years ago for somewhere in the ballpark of £600,000, he solidifies a team at Hull and is the impetus of a good start to a season that sees us in striking distance of promotion, and Leicester now want to swoop in and grab him for near the same amount they sold him for. I don’t know how business gets done in Thailand but that is not the way anyone I have ever met does business.
Let’s take a closer look at this

Now Leicester is threatening the smooth transition buy being a bunch of bitches when it comes to coughing up the money that Hull are asking for. Hull are totally entitled to be asking for £1million at least, look at the list, you don’t tell the world you are going to free up £8million and not pay and extra £300,000 for a clean transition, its suicide.

Leicester are going to force Nigel Pearson to leave Hull on his own and suffer the consequences in court while trying to lead Leicester through a possible promotion run. This is all seeming like another huge mistake by Leicester with the victim being Nigel Pearson. Good luck to Nigel, but Leicester’s owners need to wake up and remember they have a goal and it shouldn’t be to create havoc in one man’s life.

I don’t blame Hull for standing their ground on this issue and it will only hurt the Leicester transition, because you know that Hull aren’t sitting on their laurels waiting for this to finish. They have plans and will execute them as soon as all of this is settled.
Posted by MartinJon at 8:02 AM