My work comes from a place that I have yet to be able to articulate properly, but seeing as this is an artists statement, I will give it a go. 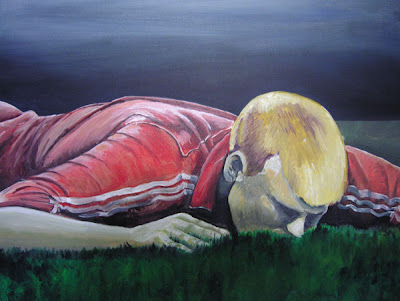 Having grown up in Chicago most of my experiences were had somewhat publicly, in front of other people. I rarely ever found myself alone, really alone, at any point in my life. Of course, I wasn't able to tell that this might be odd or not normal until I met people who grew up in the country, or the suburbs, who would take for granted that if no one was around they were alone. The sort of experiences I had tended to teach me that I am always being watched or seen. Thoughts like that have been with me ever since I can remember, if I ever did anything illegal or rebellious, I always walked away feeling I was "allowed" to do it, rather than I got away with something. 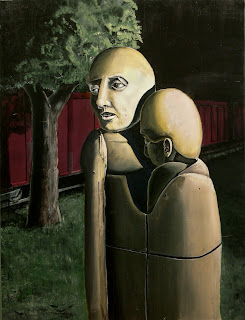 When I look back and try to figure out how I became the artist that I am today, it is clear I was effected by the thought I could be seen. The figures in my paintings, although I do not consciously try and make them self portraits, are undoubtedly reflections of myself. Putting myself on display like this seems to be me trying to figure out something about my place in the world. Again, this doesn't happen totally consciously. It is me looking at myself struggle to find meaning in my work, and contemplating what that looks like to the eyes that are upon me. Am I stuck, petrified and alone, being watched. All of this is beginning to reflect on another part of my up bringing, Roman Catholicism. Although I do not practice, most of the artwork I was exposed to before the age of 12 was stained glass and Stations of the Cross Paintings.

I refer to my works as surreal, but they are also narratives, telling or showing a story plot at a moment of change. It is said that the only thing that is constant is change and I feel this is most seen in a city, although the suburbs and outlying area may have a thing or two to say about that these days. Everything that I remember is either going or gone, this is reflected in my paintings, but there is also hints of something new. Change doesn't occur just to spite us, although it may feel that way at times, it happens because of choices being made all around us, for better or worse.

To sum up, I have no idea what the hell I am doing but by doing it I am always learning and that is what drives my work. 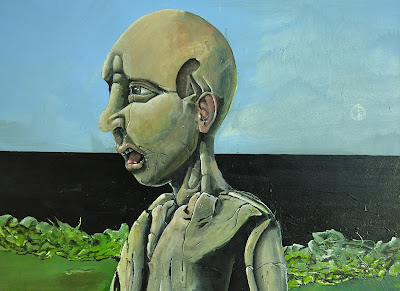