To start, there is a bit of an "Eeeew" factor when it come to eating tongue, and unless you have eaten it your whole life you will have to get over that a bit. The only way to do it is to dive right in. I would suggest go to a restaurant and get a tongue taco or something similar so as to get it as meat rather than as a whole tongue.

That Eeew mindset is because, I think, we have all bitten our tongues, and that we always have one in our mouths, well most of us do. We immediately think "Oh man, it is going to have a real tough outer skin that I will have to bite through and it is going to be strange." Not to worry folks, that is a total misconception of what tongue is. In all reality tongue is one of the most delectable, fatty and silky parts of a cow, or other animal, you could have. If you think a beef steak well prepared, I am talking medium rare with a deliciously seared outer layer, is the peak of what beef can do, let me tell you now you are WAY OFF.

Tongue is going to win you over. That is if you like meat and can get beyond the Eeeew factor that comes with eating tongue as an american who has probably never eaten it before. Cooking tongue is a bit of an ordeal, which is why I suggested getting it already prepared first. Handling a tongue, if you are not used to handling organ meats and dead animals, may be off-putting to some. Of course there are many of you who will get excited about handling a tongue and for those of you, this is something you can not screw up so dive right in if that is your fancy.

First off decide if you are going to brine or not. You can brine your tongue for 6 hours to 2 days in the refrigerator. Tongue doesn't keep well raw so buy it on the day you are going to deal with it. I should mention here that when you buy tongue you will be buying the whole tongue, there is no "Oh can I have a pound." That is another reason why it is best to get it at a restaurant first.

Now no matter if you brine it or not you are gong to boil the tongue for about 50 min per pound. I like to season my water and if you decide not to brine yours you are going to want to add additional salt to your water. Remember if you have a diet that doesn't have a lot of canned or frozen foods you probably don't have to worry about your salt intake as much as those who have a more traditional american diet. Once the tongue is boiled properly you are going to be able to peel the out skin off.

What happens seems to me to be that we create a huge blister on the tongue. We have to peel that outer layer off, that skin is that tough layer we all thought we would have to bite through, but we just toss it.

Be sure to peel that off while it is still hot, if it cools before you get that skin off it will be very difficult for you to peel so just get some tongs or something to help but get it off asap.

Now that you have a peeled tongue it is ready to be prepared for eating, like I said it is a bit of an ordeal to make one of these. I just cube the tongue and fry it up in my skillet with some fat. searing the outside of these makes a great addition to a salad similar to, but better than, pork belly. These are delicious little fatty bites that will be a welcomed addition to any Paleo or Wahls Paleo Plus diet. Deliciously fighting MS and probably cancer too. 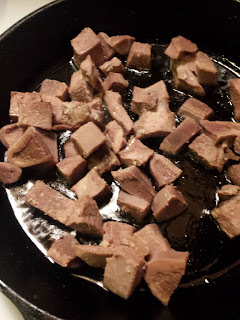