Cooking Fish in a Salt Crust - Wahls Paleo Plus

Hello again, today we are going to talk about fish. I have always been daunted by fish. It is, I have found, easy to prepare but I never think of it first. Having grown up in the Midwest I ate chicken probably 4 nights a week, then pasta, pork and beef unless it was Lent then I ate fish once a week. It's a shame really that most of the fish I ate as a kid came as a stick and was categorized simply as "Fish."

Fish is one of those things, when you do not live near an ocean, that just doesn't get on the menu as often as pizza, pork chops, or spaghetti. Since my diagnosis I have eaten fish more. My first foray was something that was familiar, canned kipper and sardines, I get these when they are packed in olive oil only because they can use some seriously poor quality oils if you are not paying attention. Those are often a bit more fishy than I prefer so I went to the land of adventure and started to get a basic understanding of how to really prepare fish. It cooks real quick and can go really wrong when overdone. When it comes to seasoning salt, pepper, rosemary and lemons are very traditional, but I knew all this already. I could fry, poach it, grill it, and bake it, again nothing new. I ran across this Salt Crust baking and it intrigued me. 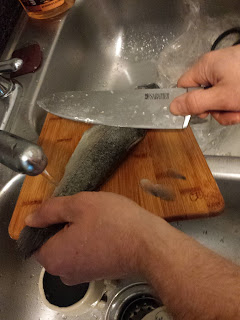 It takes a lot of salt to completely encase a whole fish but salt really isn't that expensive and it was going to be interesting either way. I started by mixing 2 cups of salt with 4 egg whites until all the salt was evenly coated and it made something like a gritty paste.

I am doing this with 2 whole Rainbow Trout and when dealing with whole fish you really want to scrape the scales as best you can. doing this is not hard but containing the scales is not easy. they will go all over and later tonight you might find a few scales on your thumb and they will be stuck there for you to peel off like a scab.

once the fish are clean and ready to for the oven you'll want to take a baking sheet and put a layer of salt down large enough to hold your fish. I am using a Pyrex dish and it was a mistake I could have used much less salt than I did and It was a bitch to get out.
\ 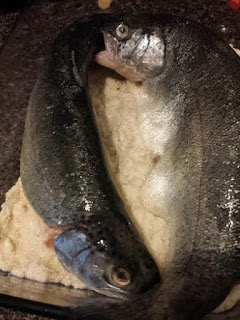 I was preparing dinner with a Pisces so I arranged the fish accordingly, again I want to mention that this would have been easier had I just used a flat pan but this was fun and seemed appropriate at the time.

I then covered the Trout with salt, I ran out of the egg-white and salt mixture and just used salt which is a method I used to cook a fillet once, of course for that you will just cook the fillet on top ot the salt and not cover it. I thought it would be all the smae in the end but no it wasn't. Please if you want feel free to lay loose salt in as a base but do not do what I did and spread loose salt atop the fish, this was mistake 2 I made making this wonderful dish, it ultimately made removing the fish a terrible ordeal, add in the fact that I also didn't use  a flat sheet but a Pyrex and I was up shit creek when it was time to remove these. Either way I won't bore you with the details of my mishaps, just know that even if you make a mistake it'll be okay, its just cooking and you can do it. 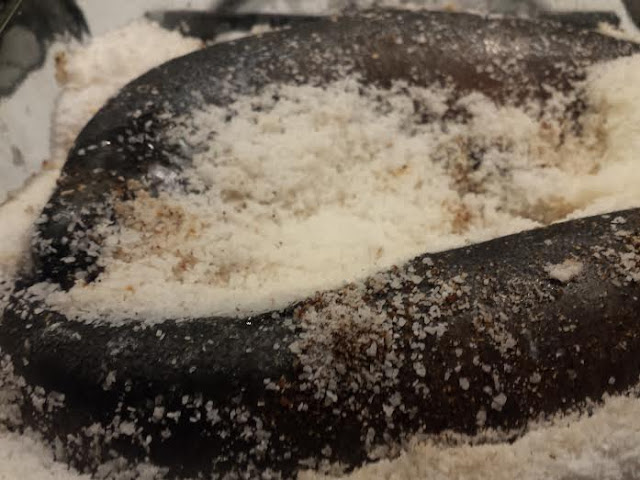 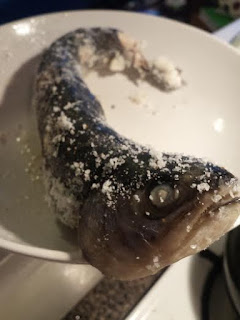 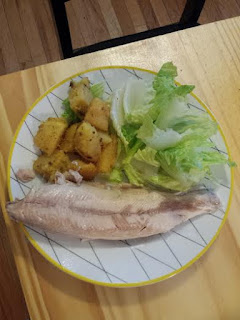 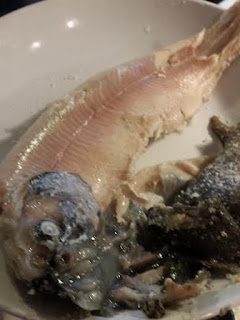 Posted by MartinJon at 5:07 PM